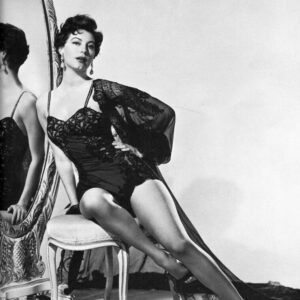 Ava Lavinia Gardner (December 24, 1922 – January 25, 1990) was an American actress and singer. Gardner was signed to a contract with Metro-Goldwyn-Mayer in 1941, and appeared mainly in small roles until she drew attention with her performance in The Killers (1946). She was nominated for the Oscar for Best Actress for her work in Mogambo (1953), and also received BAFTA Award and Golden Globe Award nominations for other films.

Gardner was visiting her sister Beatrice in New York in 1941, when Beatrice's husband Larry Tarr, a professional photographer, offered to take her portrait. He was so pleased with the results that he displayed the finished product in the front window of his Tarr Photography Studio on Fifth Avenue.[6]

A Loews Theatres legal clerk, Barnard Duhan, spotted Gardner's photo in Tarr's studio. At the time, Duhan often posed as an MGM talent scout to meet girls, using the fact that MGM was a subsidiary of Loews. Duhan entered Tarr's and tried to get Gardner's number, but was rebuffed by the receptionist. Duhan made the comment, "Somebody should send her info to MGM", and the Tarrs did so immediately. Shortly after, Gardner, who at the time was a student at Atlantic Christian College, traveled to New York to be interviewed at MGM's New York office by Al Altman, head of MGM's New York talent department. With cameras rolling, he directed the 18-year-old to walk towards the camera, turn and walk away, then rearrange some flowers in a vase. He did not attempt to record her voice because her Southern accent made understanding her difficult for him. Louis B. Mayer, head of the studio, however, sent a telegram to Altman: "She can't sing, she can't act, she can't talk, she's terrific!"[6] She was offered a standard contract by MGM, and left school for Hollywood in 1941, with her sister Beatrice accompanying her. MGM's first order of business was to provide her with a speech coach, as her Carolina drawl was nearly incomprehensible to them.[7]
1942–1964[edit]
Her first appearance in a feature film was as a walk on in the Norma Shearer vehicle We Were Dancing (1942). Fifteen bit parts later she received her first screen billing in Three Men in White (1944), a Dr. Kildare film in which she brings her mother to the hospital for treatment. After five years of bit parts, mostly at MGM, and many of them uncredited, Gardner came to prominence in the Mark Hellinger-produced smash-hit film noir The Killers (1946), playing the femme fatale Kitty Collins.

Other films include The Hucksters (1947), Show Boat (1951), The Snows of Kilimanjaro (1952), Lone Star (1952), Mogambo (1953), The Barefoot Contessa (1954), Bhowani Junction (1956), The Sun Also Rises (1957), and On the Beach (1959). In The Barefoot Contessa, she played the role of doomed beauty Maria Vargas, a fiercely independent woman who goes from Spanish dancer to international film star with the help of a Hollywood director played by Humphrey Bogart, with tragic consequences.

Gardner at the premiere of The Barefoot Contessa in 1954

Gardner starred as Guinevere in Knights of the Round Table (1953), opposite actor Robert Taylor as Sir Lancelot. Indicative of her sophistication, she portrayed a duchess, a baroness, and other ladies of royal lineage in her films of the 1950s.

Off-camera, she could be witty and pithy, as in her assessment of director John Ford, who directed Mogambo ("The meanest man on earth. Thoroughly evil. Adored him!").[8]

She was billed between Charlton Heston and David Niven for 55 Days at Peking (1963), which was set in China during the Boxer Rebellion in 1900. The following year, she played her last major leading role in a critically acclaimed film, The Night of the Iguana (1964), based upon a Tennessee Williams play, and starring Richard Burton as an atheist clergyman and Deborah Kerr as a gentle artist traveling with her aged poet grandfather. John Huston directed the movie in Puerto Vallarta, Mexico, insisting on making the film in black and white – a decision he later regretted because of the vivid colors of the flora. Gardner received billing below Burton, but above Kerr. She was nominated for a BAFTA and a Golden Globe Award for her performance.

She next appeared again with Burt Lancaster, her co-star from The Killers, this time along with Kirk Douglas and Fredric March, in Seven Days in May (1964), a thriller about an attempted military takeover of the US government. Gardner played a former love interest of Lancaster's who could have been instrumental in Douglas's preventing a coup against the President of the United States.
1965–1986[edit]
John Huston chose Gardner for the part of Sarah, the wife of Abraham (played by George C. Scott), in the Dino De Laurentiis film The Bible: In the Beginning..., which was released in 1966.[9] In a 1964 interview, she talked about why she accepted the role:
He [Huston] had more faith in me than I did myself. Now I'm glad I listened, for it is a challenging role and a very demanding one. I start out as a young wife, and age through various periods, forcing me to adjust psychologically to each age. It is a complete departure for me, and most intriguing. In this role, I must create a character, not just play one.[9]
Two years later, in 1966, Gardner briefly sought the role of Mrs. Robinson in Mike Nichols' The Graduate (1967). She reportedly called Nichols and said, "I want to see you! I want to talk about this Graduate thing!" Nichols never seriously considered her for the part, preferring to cast a younger woman (Anne Bancroft was 35, while Gardner was 44), but he did visit her hotel, where he later recounted, "she sat at a little French desk with a telephone, she went through every movie star cliché. She said, 'All right, let's talk about your movie. First of all, I strip for nobody.'"[10]

Gardner moved to London in 1968, undergoing an elective hysterectomy to allay her worries of contracting the uterine cancer that had claimed the life of her mother. That year, she appeared in Mayerling, in which she played the supporting role of Austrian Empress Elisabeth of Austria, opposite James Mason as Emperor Franz Joseph I.

She appeared in a number of disaster films throughout the 1970s, notably Earthquake (1974) with Heston, The Cassandra Crossing (1976) with Lancaster, and the Canadian movie City on Fire (1979). She appeared briefly as Lillie Langtry at the end of The Life and Times of Judge Roy Bean (1972), and in The Blue Bird (1976). Her last movie was Regina Roma (1982). In the 1980s, she acted primarily on television, including the miniseries remake of The Long, Hot Summer and in a story arc on Knots Landing (both 1985).